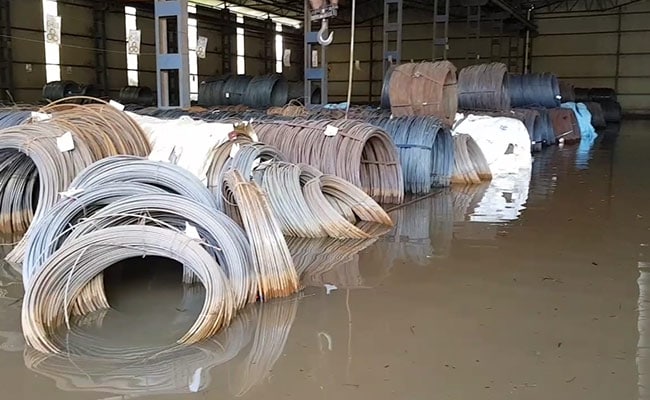 Pockets of Chennai’s Manali are flooded due to heavy rain

Pockets of Chennai’s Manali are flooded partly due to heavy rainfall in Andhra Pradesh’s Chittoor as the heavy discharge into River Kosasthalaiyar has inundated several areas after 35000 cusecs of water was released from Poondi reservoir over the weekend.

At MRB Nagar, NDTV met with Vanitha after a police team on a boat rescued her and her three children. Water had entered their home and even contaminated water stored in their underground sump.

She left for her mother’s place. “There was so much water. I didn’t get milk for my children. Snakes and insects have come inside the house,” Vanitha told NDTV.

Their neighbourhood, an approved layout, is in knee- to waist-deep water. Many like her have left their homes.

Dr Benjamin, who has a clinic, wades through water to reach his patients. “Water is not just moving. We have been suffering since Saturday. We are unable to go out,” he said.

Dhanalatshmi’s family had moved in two years ago, but the construction of storm water drains is not complete yet. “If this was completed as scheduled we wouldn’t be suffering like this,” she said.

“The authorities should also discuss with residents on the specific water logging problems and direction of flow to fix this. They don’t do this,” Mohanshanmukam said.

The area is dotted with industries. Many are flooded. An iron and steel warehouse that NDTV visited had the entire stock in water. Many are worried about the setback they will suffer because of the flooding. The city has already received 66 per cent more than the average rainfall.

The weather office has forecast more rain. The Chennai Corporation says the discharge has been reduced and the water would recede soon.

A Rs 5,000 crore project they say is connecting many news areas with the storm water drains network.

Residents are angry that even six years after the 2015 floods, there is no functional storm water drains yet. This issue could turn into a major challenge for the new DMK government that has so far been blaming the earlier AIADMK regime for the mess.