Fast-growing non-alcoholic spirits brand Lyre’s, has raised $37 million in a round that values the business at A$500 million less than three years after it launched.

The funding round was led by new investor, D Squared Capital, alongside existing investor, Morgan Creek Capital Management, which has also backedAlibaba, SpaceX, Lyft, and Allbirds). Other previous investors joining the fresh round include DLF Venture, VRD Ventures, and Maropost Ventures.

Co-founders Mark Livings and Carl Hartmann launched Lyre’s in April 2019 with the goal of creating non-alcoholic versions of the world’s most popular spirits. It now produces 14 non-alcoholic spirits with the distinct flavours of gin, whisky, vermouth, amaretto, absinthe, rum and others, as well as a range of ready-to-drink pre-mixed non-alcoholic cocktails, from an Amalfi spritz to and rum and cola and G&T.

With around 20% of the population not drinking alcohol, consumption trends heading down among existing drinkers, and an emerging, liberated middle class in Muslim countries looking to have fun and socialise while eschewing alcohol.

CEO Mark Livings said the latest capital injection will be used predominantly for marketing, and create more than 50 new jobs in sales and marketing, production, logistics, finance and e-commerce.

Lyre’s products are now available in more than 60 countries, up 50% in 2021, including in the Middle East and China. This year also saw the business manufacture its one millionth bottle, and develop six new product variations including Classico, their first no-alcohol Prosecco-style sparkling which launched to market early November. The company now has production facilities in the UK, Germany, Australia, and the US.

The drinks startup has also established an R&D division in partnership with beverage technology giant Döhler.

“Millennials and older Gen Zs are drinking less alcohol than any generation before them, but the mindful drinking movement transcends generations and cultural borders. We’re not only growing our business – we’re expanding the whole category, entering territories like the Middle East and Far East virtually uncontested,” he said. 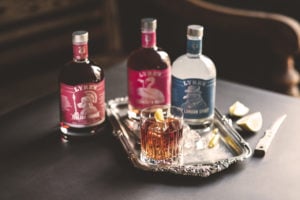 The Lyres non-alcoholic negroni – made from three products they make.

“The pace of growth we’re seeing is exceptional. We sold our first bottle in 2019 and today we’re selling one at least every 30 seconds. On our current trajectory, Lyre’s is set to become the fastest independent beverage brand to reach Unicorn status.”

Off-premise sales of low-alcoholic and non-alcoholic drinks have jumped in 12 months from $291 million to $3.1 billion. In Australia the category is expected to grow by 16% over four years to 2024.

“The no/low alcohol beverage market is one of the fastest growing markets in F&B and is showing similar characteristics to plant-based milks, meats and other mindful consumer categories,” he said.

“Lyre’s leading product, brand and range of award-winning SKUs have proven that they are the industry leader and we are excited to be backing the best in class company.”