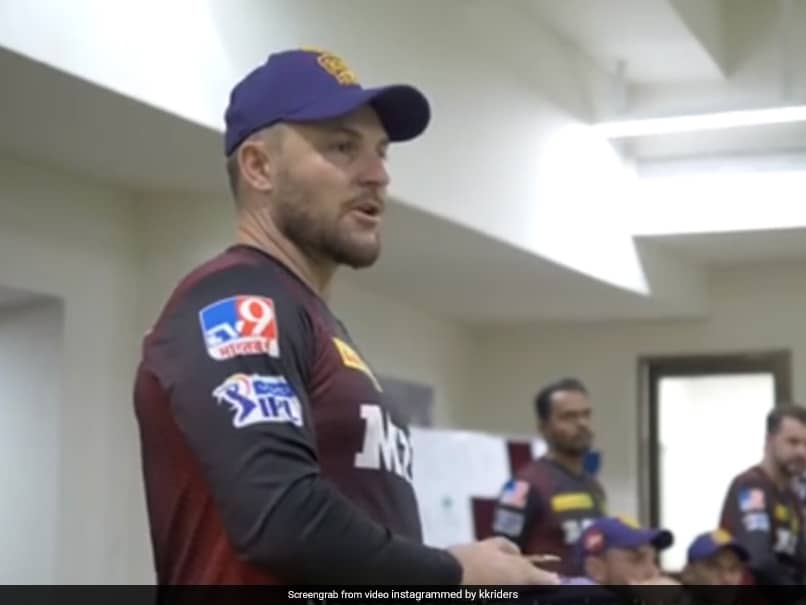 
Kolkata Knight Riders’ (KKR) head coach Brendon McCullum on Monday delivered a passionate speech in the KKR dressing room after the Eoin Morgan-led outfit ended their four-match losing streak with a five-wicket win over Punjab Kings (PBKS) in the 21st match of the Indian Premier League (IPL 2021). KKR started its IPL campaign on a positive note as they beat SunRisers Hyderabad (SRH) by 10 runs in their tournament opener. However, after that, their campaign went downhill as they were beaten by Mumbai Indians (MI), Royal Challengers Bangalore (RCB), Chennai Super Kings (CSK) and Rajasthan Royal (RR) in their next four games.

On Monday, KKR ended their losing streak with a five-wicket win over KL Rahul’s PBKS and that inspired McCullum to pump up his squad with a zealous dressing room speech.

KKR shared the video of McCullum’s speech on Instagram and captioned it, “The next step is to continue to get tighter and tighter as a unit” – @bazmccullum42’s post-match Dressing Room talk after #PBKSvsKKR.”

McCullum started his dressing room talk by showering praise on his squad for their victory. “Outstanding efforts tonight. Two points, so well done to everyone. We did the job with the ball, we did the job on the field.”

The former New Zealand skipper praised Morgan and Tripathi for their “counter-attack” with the bat.

“We put ourselves under a little bit of pressure with the bat. But I want to focus on the fact that at 20/3. Eoin Morgan and Rahul Tripathi counter-attacked with the bat,” he said, before adding, “And just through some of the intent you guys showed. Coming down the wicket, coming across your stumps and playing some convincing shots. All of a sudden started to put some pressure back on them and eased the pressure on us.”

“That’s what I am talking about, ok. That’s what I mean about playing cricket with intent. No one is going to give it to you. You gotta go and have it. Alright! You guys did that today. We’ve started off well. We’ve got ourselves a win now. Got a little bit of confidence under the belt. The next step is to continue to get tighter and tighter as a unit,” McCullum concluded.

KKR will next take on Delhi Capitals on Thursday in Ahmadabad.